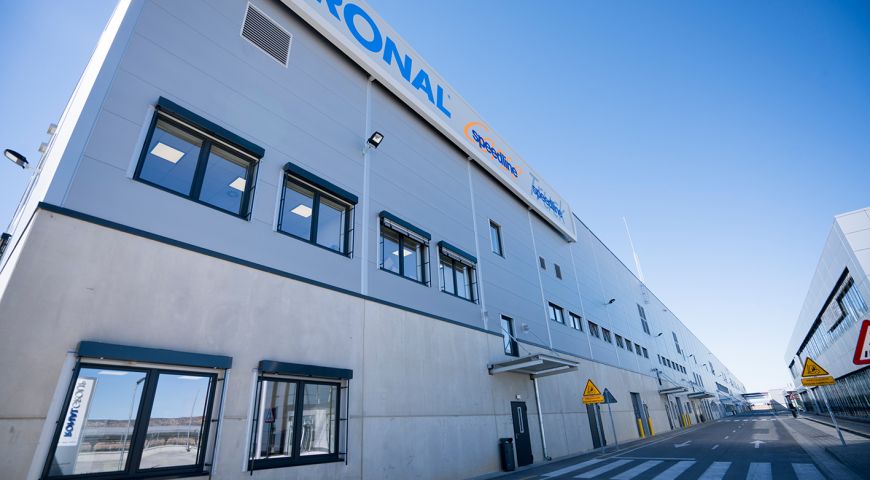 Härkingen/Switzerland, 2017/10/30 – The RONAL GROUP, one of the world’s leading manufacturers of light alloy wheels for cars and commercial vehicles, has built a second plant in Teruel, Spain, which was officially opened on October 10, 2017. The RONAL GROUP has had a production and administration facility in the Aragón region of north-eastern Spain since 1983 and is an important pillar of the economy there.

With the construction of a second plant in Teruel, the foundation stone for which was laid in February 2016, the RONAL GROUP is increasing its production capacity and hence pursuing a clear and consistent growth strategy. The manufacturer of high-quality aluminum wheels is strengthening its presence in the region where many car constructors are represented.

Built on an area covering 240,000 m2, the RONAL GROUP has invested 120 million euros in the new plant. Thanks to the latest robot, automation and information systems, in the first phase approximately 1 million wheels will be produced; this will later increase to 1.5 million wheels. The total capacity of the two Teruel sites is set to increase to over 3 million wheels per year in phase two. The RONAL GROUP, which is an important employer in the Aragón region, has created over 100 new jobs by building the new plant.

In addition to Yvo Schnarrenberger, CEO of the RONAL GROUP and Dominik Wiederhold, MD of the two RONAL Ibérica sites, the President of the Aragón local authority, Javier Lambán, the Mayor of Teruel, Emma Buj, the Swiss Ambassador for Spain and Andorra, Giulio Haas, and the MD of the subsidiaries, among others, were present for the grand opening. Numerous guests from politics and business, as well as suppliers and representatives of the press, were also there.

In addition to the two plants in Spain, the RONAL GROUP has other production facilities in Germany, Italy, Poland, the Czech Republic, Mexico and Taiwan, producing over 21 million wheels every year. The new factory in Spain puts the RONAL GROUP in a good position for the future, ensuring continued optimum customer service.