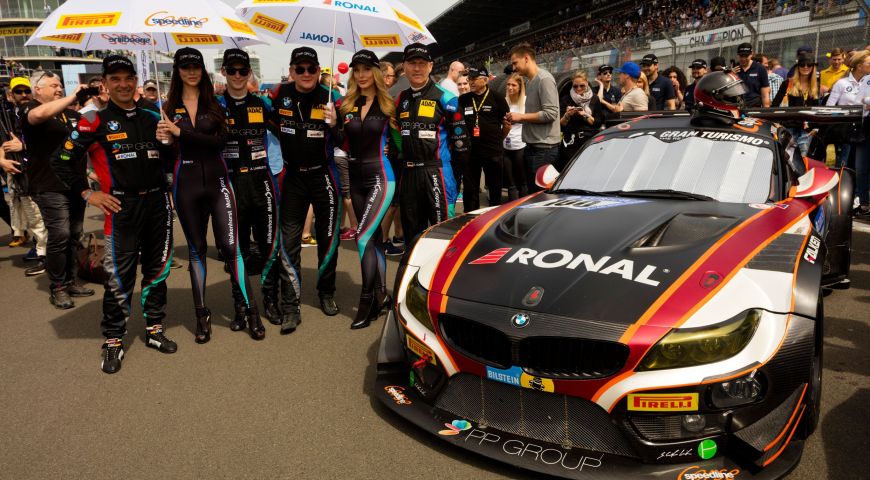 One Race, One Team, One Goal: RONAL GROUP, Team Schirmer and Pirelli in the Eifel

Härkingen/Switzerland, 2018/05/23 – The 46th ADAC 24-hour race took place between May 10–13 on the longest track in the world at the Nürburgring. Four Team Schirmer racing cars equipped with RONAL GROUP wheels and Pirelli tires were among almost 150 cars on the grid at the “Grüne Hölle” (Green Hell). An additional surprise highlight was the presence of the public’s favorite Zetti from the PP Group, appearing as “RONAL Z4” with a new design and well-known drivers at the wheel.

Just like last year, the RONAL GROUP supported the Team Schirmer racing team with unitary, forged SPEEDLINE CORSE wheels in various dimensions in Racing Gold, which have been specially developed for the racing track. Two black BMW M4, one BMW M2, and a white BMW E92 330i were equipped with the special wheels.

The results were clear to see: three of the cars finished well. The team won second and fourth place in the SP8T class (overall classification in positions 42 and 52). The Pirelli junior team in the BMW E92 330i came second in their first time at the 24-hour race in class V5 (overall classification in position 66). The “RONAL Z4” driven by Peter Posavac, Jörg Müller, Rudi Adams and Alex Lambertz proved a real hit with fans on Adenauer Race Day and reached the top 30 qualifying stage with ease. Sadly the “Green Hell” adventure ended unexpectedly early: the “RONAL Z4” crashed at Kesselchen after around 4.5 hours.

Once again, over 150 employees from the RONAL GROUP, Team Schirmer, Pirelli and its partners were there around the racetrack to support the team through the incredibly varied weather conditions – bright sunshine, rain, fog. Whether in the team tent, the two-floor exhibition pavilion, the box, or a VIP spot by the track at the so-called Antoniusbuche – smooth teamwork ensured that the days at the Nürburgring were a total success for the team.

Alongside a selection of RONAL and SPEEDLINE CORSE wheels and Pirelli tires, the stand in the pavilion also provided information about the innovative “Driver” retail concept. Visitors could take photos in the Selfie Box and win a range of non-cash prizes and entry tickets for the Antoniusbuche, with the main prize being a VIP weekend at the VLN 6-hour endurance race for two people. Furthermore, a RACING CORNER was set up at the Antoniusbuche where fans and guests of RONAL GROUP and Pirelli could follow the race up close.

Anyone who wasn’t there at the live 24-hour race can still find out more about what happened via the RACING LOUNGE social media channels. Plenty of photos and videos can be found on racinglounge.tv, Facebook and Instagram, in addition to information about the Team Schirmer cars and various interviews that give an exclusive behind-the-scenes view.