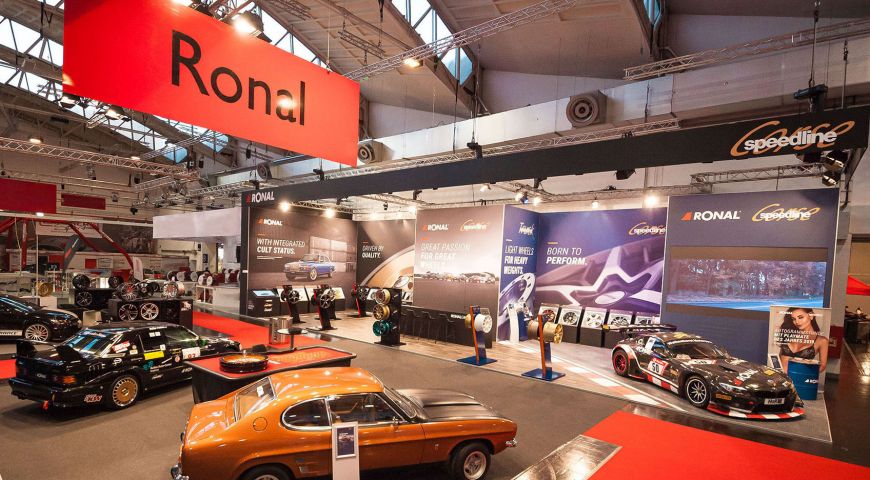 Härkingen/Switzerland, 2019/12/13 – Under the headline “Past meets future”, the RONAL GROUP attended the 52nd Essen Motor Show held from November 30 to December 8, 2019. At the newly conceptualized trade show booth with dynamic wheel stands and illuminated showcases, the company highlighted various products from its RONAL, SPEEDLINE CORSE and SPEEDLINE TRUCK brands, as well as three special vehicles.

To conclude its anniversary year, the RONAL GROUP featured an additional exhibition area across from its main booth, presenting two car classics: a Ford Capri RS2600 V6 with original RS wheels from the year 1969 as well as a Mercedes E190 from 1988 with RONAL R50 wheels in gold. Owner David Roels, the only paraplegic wheelchair user to take part in international drift races, was also on site. As a source for fun and high spirits, a roulette table with professional dealer in the anniversary area gave visitors the chance to win awesome prizes.

The six fashion wheels – existing designs with a new look – drew a great deal of attention. Features included a SPEEDLINE CORSE SL8 in bronze diamond cut, an SC1 with a colorful reflective surface in turquoise and purple, refined with innovative chrome paint, and another variant of the SC1 with bolt-on Aero ring elements. From the RONAL range, the R50 AERO was highlighted in two special versions: On the one hand, in a blue-white with a racing sticker, and on the other in a gold-rim lip diamond cut with a racing sticker and a central locking look. With the fashion wheels, the company not only was able to present a small selection of new colors, technologies and design ideas, but also gauge the visitors’ favorites.

Motorsports was also once again a hot topic. Besides the popular RONAL “Zetti” BMW Z4 GT3, the company also exhibited two wheels from the SPEEDLINE RACING portfolio for racing teams, as well as the SPEEDLINE CORSE SC1 Motorismo racing wheel, which is approved for street use.

And last but not least, our hostess Veronika Klimovits – 2019 Playmate of the year – was available for pictures and autographs over the course of the trade fair.