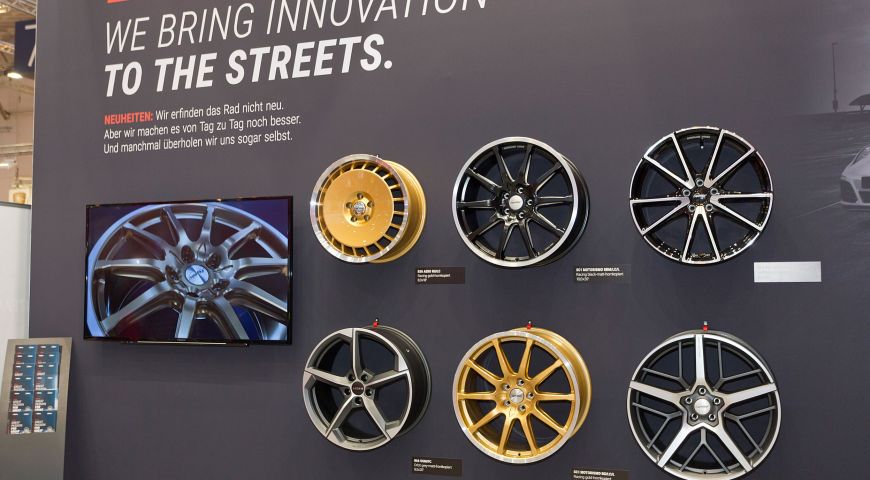 Härkingen, Switzerland, 2018/12/12 – The RONAL GROUP, one of the world’s leading manufacturers of light alloy wheels for cars and commercial vehicles, has expressed great satisfaction with its showing at this year’s Essen Motor Show. From 1 to 9 December, the company presented new items in the RONAL, SPEEDLINE CORSE and SPEEDLINE TRUCK brands. Taxi rides in the motor sport hall in the RONAL “Zetti” BMW Z4 GT3, which took part in the 24 hour race at the Nürburgring, were just another highlight. These exclusive rides were won in a competition at the RONAL GROUP stand and were well received by visitors.

The RONAL GROUP will be celebrating its 50th anniversary in 2019. To mark the occasion, the company presented the anniversary wheel, the RONAL R50 AERO in Racing gold-rim lip diamond-cut which continues the cult of conventional wheels with turbine-like spokes to cool the brakes. It gets its name from the closed shape and the resultant aerodynamics. The anniversary version of the RONAL R50 will be available in the 7.5×16 inch and 8.0×18 inch sizes.

Furthermore, the RONAL GROUP presented a number of new designs. These included the elegant asymmetric RONAL R66 wheel in the innovative Orbit grey-matt-front diamond cut finish. The new R66 will be offered in early 2019 initially in 8.5 x 20 inch with 5-hole mounting.

Two brand-new sporty designs in the prestigious SPEEDLINE CORSE range were unveiled: The SC1 Motorismo and the SL8 Dominatore, both set apart by their perfect form and modern, contemporary appearance. The five machine-polished spokes in combination with the set-back Y-shaped connections to the rim base underline the premium feel of the SL8. It will be available initially in 8.5 to 11.5 x 21 inch versions.

RONAL brings the racetrack to the road with the new sporty SPEEDLINE CORSE SC1 Motorismo wheel. Intricate production processes such as flowforming make it particularly lightweight and innovative diamond cutting technology delivers surface refinement and even more weight saving. The SC1 has been approved for road use and will be available in Racing black-matt-rim lip diamond cut and in the winning color Racing gold-rim lip diamond cut in 8.0 to 11.5 x 20 inch.

As in previous years, the stand display at the Essen Motor Show included a vehicle which had taken part in the most recent 24 hour race at the Nürburgring – this time it was the RONAL “Zetti” BMW Z4 GT3. There were taxi rides in the motorsport arena to be won at the popular selfie-station. These and the autograph session with three drivers of the racing vehicle inspired great enthusiasm in the motorsport and tuning fans, topping off the RONAL GROUP’s appearance at the ESSEN Motor Show this year.