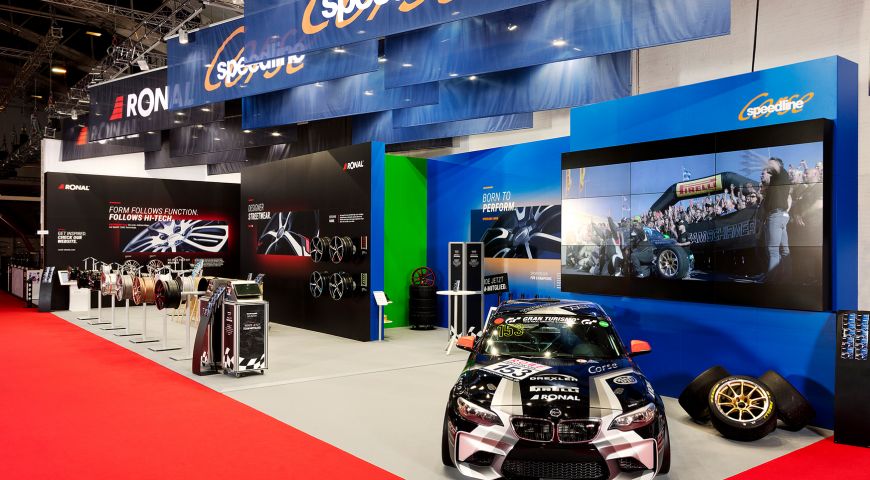 Härkingen/Switzerland, 2018/11/15 – The RONAL GROUP, one of the world’s leading manufacturers of light alloy wheels for cars and commercial vehicles, will again be represented this year at the Essen Motor Show. From December 1 to 9, 2018,  the Company will show off its latest products from the RONAL, SPEEDLINE CORSE and SPEEDLINE TRUCK range in exhibition hall 7, stand E19. Furthermore, there will be exclusive taxi rides in the RONAL “Zetti” BMW Z4 GT3 in the motorsport arena in exhibition hall 4, and many other attractive prizes can be won.

Among the highlights on the exhibition stand is the RONAL R50 AERO in racing gold-rim lip diamond cut. This design is the RONAL GROUP’s anniversary wheel for 2019 – because the company is celebrating its 50th anniversary! The RONAL R50 AERO wheel updates the cult of conventional wheels with turbine-like spokes to cool the brakes. It gets its name from the closed shape and the resultant aerodynamics. The anniversary version of RONAL R50 will be available in sizes of 7.5×16 inches and 8.0×18 inches.

The SL6 Vettore in its attractive five double-spoke design from the prestigious SPEEDLINE CORSE range will be presented for the first time in 20 inch size. The SL6 Vettore design is both alluring and enchanting with its sporty and dynamic appearance and meets the highest requirements for lightness and quality thanks to flowforming and laser technology. The SL6 Vettore design will be presented in the three surface options: jet black-front diamond cut, bronze-matt diamond cut and jet black-matt red spoke.

Furthermore, three more brand new sporty designs will also be uncovered on the RONAL GROUP stand: A wheel from the RONAL range, as well as two more from the SPEEDLINE CORSE program.

As in previous years, one vehicle that took part in the 24-hour race Nürburgring will also be shown this year at the Essen Motor Show: This time visitors can admire the RONAL “Zetti” BMW Z4 GT3 and win taxi rides in the second “Zetti” in the motorsport arena. In addition, on the first weekend all three racing car drivers will be present on the stand and available for photos and autographs. After the trade fair all participants will be entered in a raffle for a VIP weekend for two people at the Nürburgring including taxi rides and a set of RONAL or SPEEDLINE CORSE wheels.

The RONAL GROUP stand with its RONAL, SPEEDLINE CORSE and SPEEDLINE TRUCK brands can be found at the Essen Motor Show in hall 7, stand E19.