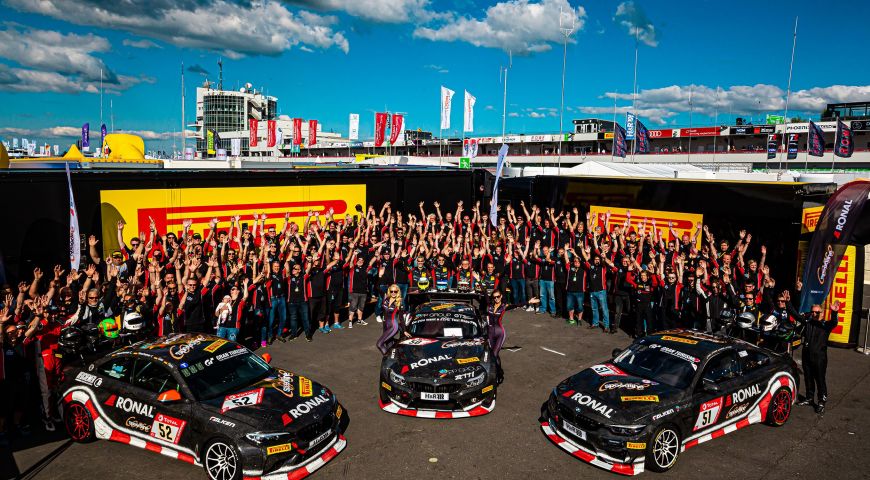 Härkingen/Switzerland, 2019/07/17 – From June 20–23, was the 47th time that approximately 200 vehicles started the toughest and most difficult endurance race in the world at the Nürburgring “green hell”. The RONAL GROUP was at the starting line together with the tire manufacturer Pirelli as “Team SPEEDLINE RACING” with three racing cars. The team received technical support in the pit from Walkenhorst Motorsport and TomCri Motorsport.

This year the RONAL GROUP and Pirelli competed in the Eifel region under the new name “Team SPEEDLINE RACING”. With three cars in the iconic North Loop style, the team of 150 volunteer staff fought for victory. The well-known “Zetti” BMW Z4 GT3 of the PP Group in the SP9 class, accompanied by a BMW M4 GT from Walkenhorst Motosport and a BMW M2 GT from TomCri Motorsport, competed in the SP8T class. All three vehicles were equipped with specially made SPEEDLINE CORSE motorsport wheels in white-black or red-black, and proved a real head-turner.

Even before the 24-hour race there was a particular highlight: On the traditional Adenauer Racing Day, the RONAL “Zetti” drove in convoy from the racetrack to the heart of the race venue in the Eifel. Whether during interviews, photos or signing autographs – there were no barriers between drivers and fans. RONAL and SPEEDLINE CORSE were also in the drivers’ paddock throughout the entire event. In the fan tent visitors could experience the “taxi Zetti” live, inform themselves about the latest wheel trends and win fantastic prizes at the hashtag sign promo. In addition, the race could be followed live on a large screen throughout.

On Saturday at noon the fans also had the chance to experience the driver and team up close at the “gridwalk” (the starting line-up), including a large signature campaign on the “Zetti”. After a smooth start, during the race the car developed engine failure. The team replaced the entire V8 racing engine during an almost 9-hour overnight screwdriver operation, allowing the “Zetti” to be sent back on track. However, a collision in the early morning ended in them having to retire. All the more gratifying when the other two cars, however, successfully crossed the finish line, the BMW M4 even coming in 2nd in its class.