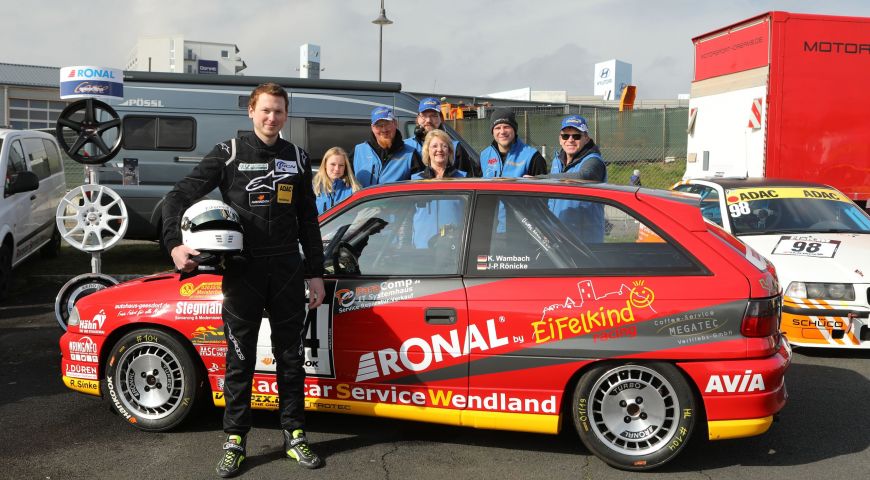 Härkingen/Switzerland, 2019/04/09 – This year, for the first time, the RONAL GROUP will be supporting and sponsoring the EiFelkind Racing team at the RCN circuit racing challenge at the Nürburgring, Germany’s oldest touring car race series.

The RCN has been a popular event since the early 1960’s. For many years, young drivers have taken their first “steps” at this long-distance race series for beginners which takes place on the most demanding and difficult racing track in the world.

The RONAL GROUP has always supported the interests of young people, firstly by offering sound professional training. Trainees are given careful and responsible supervision and guidance. Secondly, for the last two years, the RONAL GROUP has been working to support the participation of young people in motor sports. In collaboration with Pirelli, the tire manufacturer, the wheel producer has already set up a successful VLN junior team. This year, the RONAL GROUP has also chosen to support a series which offers young drivers the opportunity to gain a foothold in professional motor sports and is working for the first time with the famous and popular EiFelkind Racing team.

This small approachable family team has already won many fans with its primary aim of encouraging a new generation of young and talented drivers and supporting them on their entry into professional motor sports. EiFelkind Racing makes well prepared vehicles available to young drivers at a fair price, supporting young talents not only with financing but also its wealth of experience. The team has been a successful participant in motor sports since 2013. Besides, the EiFelKind Racing team also helps young people to acquire the necessary drivers licenses.

The vehicles, two Opel Astra GSI 2.0/16V, will be equipped with the famous RONAL R10 cult wheels for the participation in class H this year. Team boss Uwe Wendland deliberately chose these traditional wheels: “The Astra just has to have the classic RONAL turbo wheel!”

#Getquu works alongside the RONAL GROUP as another sponsor and partner. #Getquu, a new player in the eSport area with a focus on virtual motor sports (simracing) is planning to expand its involvement in eSports and motor sports.