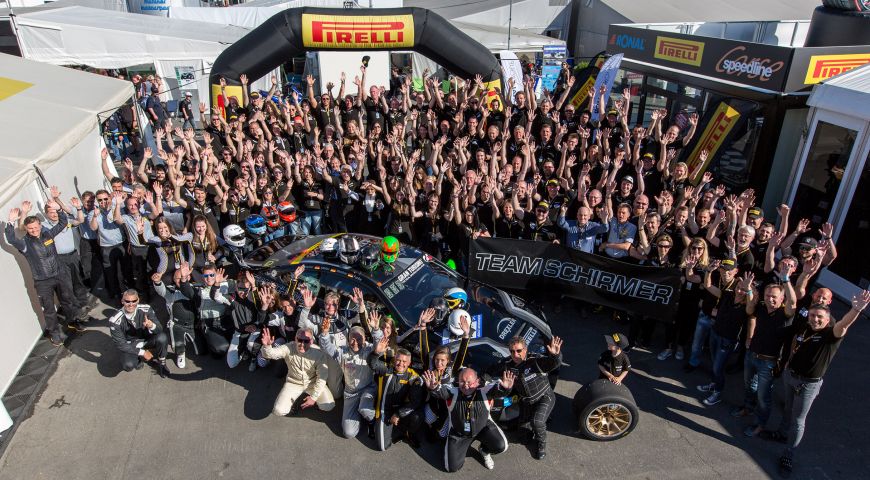 Härkingen/Switzerland, 2018/04/27 – It is that time again from May 10 to 13: For the 46th year in a row, around 200 vehicles are due to line up on the starting grid at the Nürburgring Nordschleife “Green Hell” to take part in the ADAC Zurich 24 Hour Race. Together with its partner, the tire manufacturer Pirelli, the RONAL GROUP has equipped four racing cars from the vehicle manufacturer Schirmer Engineering.

The RONAL GROUP has been actively involved in supplying wheel rims to the 24 Hour Race since 1982. On the 46th anniversary of the motor sport spectacle, just like last year, the company is supporting Team Schirmer with unitary, forged SPEEDLINE CORSE wheel rims in 11.5×18 and 12.0×18 inch sizes in Racing Gold, that have been specially developed for the racing track. Once again this year, two black BMW M4s, as well as one BMW M2, will compete in the SP8T class. Each has a strong driver pairing. Also, for the first time, a four-man Pirelli Junior Team is making its entrance under the Team Schirmer flag. The talented young drivers acquired their starting license for the Nordschleife in just one year via the RCN stars of tomorrow series, and three subsequent VLN endurance races. They will line up at the starting grid in class V5 in a white BMW 330i with golden SPEEDLINE CORSE Turini 9.0×17 inch wheel.

The RONAL GROUP and partner Pirelli will also look after maintenance and information by the racing track. Various RONAL, SPEEDLINE CORSE and Pirelli etc. branded products will be exhibited in a two-floor pavilion; where the topic will also be color; the tire manufacturer will also present its innovative retail “Driver” concept. Visitors will be able to take fun selfies in a photo booth, the main prize being a VIP weekend at the VLN 6-hour endurance race for two people, in addition to non-cash prizes. There are also instant prizes of daily entrance tickets to the exclusive “Antoniusbuche” RACING CORNER. A further highlight that visitors have the opportunity to enjoy is a unique look at the team workshop to watch the mechanics in action. A live studio will also be erected on the upper floor, where image and sound contributions can be cut directly and posted promptly on social channels.

Not least, the RONAL GROUP, Team Schirmer and Pirelli will be taking advantage of the event to give both customers and staff an insight into the world of motorsport: A crew totaling 150 people will be giving their all to carry off one of the coveted trophies and make the event a resounding success.

People who cannot be there in situ will be able to feel they are in the midst of it and not just standing on the sidelines. Thanks to the RACING LOUNGE social media channels, those who are interested can keep up to date around the clock: On racinglounge.tv, Facebook and Instagram, lots of photos and videos can be found, in addition to information on cars and various interviews that give an exclusive behind-the-scenes view of the mega-event and the team.