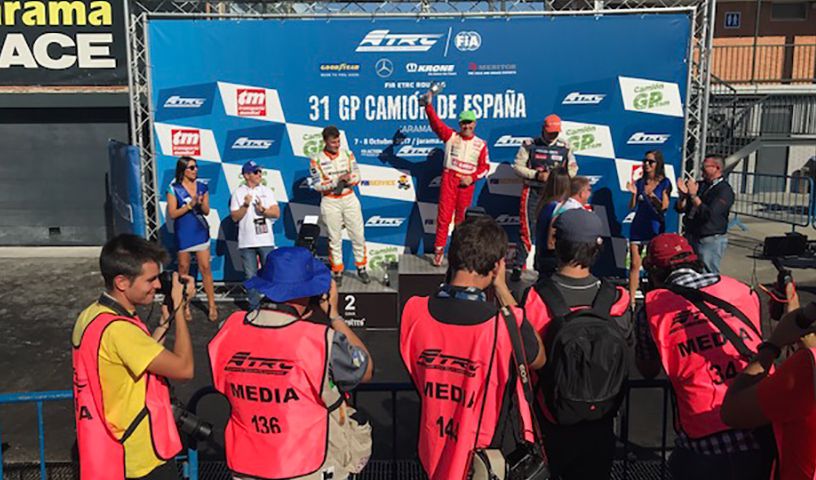 Presezzo/Italy, 2017/11/02 – The weekend of 7 and 8 October saw the last race of this year’s FIA European Truck Racing Championship season. At the Truck Grand Prix in Jarama, Madrid (Spain), three-time European champion Antonio Albacete clinched first place twice in his MAN, and came second in one race too. This gave him fifth place in the overall ranking. A team from RONAL Ibérica was on site to support the Spanish truck driver as sponsor and wheel supplier this season.

RONAL Ibérica, a subsidiary of the Swiss RONAL GROUP, distributes its SPEEDLINE TRUCK wheel brand in Spain. A dedicated sales team is responsible for marketing the SPEEDLINE TRUCK wheels to trailer manufacturers and specialist dealers in Spain. RONAL Ibérica is also a major manufacturer of aluminum wheels for the original equipment fitting of passenger cars in Spain, with its own plants in Teruel.

During the FIA European Truck Racing Championship Season 2017, RONAL Ibérica cooperated successfully with Spanish racing driver Antonio Albacete, who won the European Championship three times (2005, 2006, 2010) and was runner up three times (2011, 2012, 2013). This year too, Albacete, who drove for the Lutz Bernau racing team, finished the season in an excellent fifth place.

Throughout the season, the RONAL Ibérica team equipped the Spanish truck driver’s MAN truck with forged, high-strength wheels. SPEEDLINE TRUCK wheels have been used in the Truck Grand Prix since 2012, and have proven their strength and resilience ever since.

Moreover, during the last race weekend of the season in Jarama, visitors were treated to an overview of the latest SPEEDLINE TRUCK products in a wheel exhibition and were able to obtain detailed information.

The SPEEDLINE TRUCK’s forged wheels range for commercial vehicles is one of the most comprehensive of its kind in Europe. The products demonstrate an ideal wheel weight to load capacity ratio. The payloads meet or exceed the industry’s most stringent requirements. In addition to endurance tests under race conditions, all wheels are TÜV tested and have German ABE approval. Essential wheels are also tested and approved for original equipment use.